The novelization of Marco Polo.

Undoubtedly the most sought after of the lost Doctor Who serials, Marco Polo has an almost mythical status.  An historical story, this seven part serial was the fourth to be broadcast and is set in 1289 Cathay (China).  Landing in the Himalayas, the Tardis Crew are picked up by the explorer Marco Polo as his caravan is making its way along  the Silk Road to meet Emperor Kublai Khan. Seeking to win the favour of Khan, Polo seizes the Tardis with the intention of giving the strange “flying caravan” to him.

The BBC made a 30 minute reconstruction of Marco Polo and it was released with The Edge of Destruction as part of the 3 disc The Beginnings box set.  Utilizing photographs from the production, the reconstruction provides a nice teaser of what clearly was an extraordinary serial.  Surprisingly, many colour photos have been preserved, a few of which I share for your viewing pleasure. 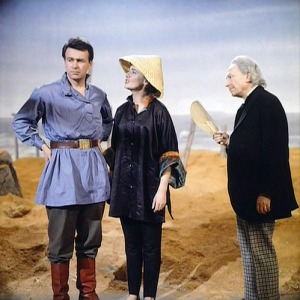 The 30 minute BBC reconstruction of “Marco Polo” can be found in the 3 Disc box set “The Beginning”.

The necessity to produce a two part story without any budget for guest actors, or sets other than the pre-existing Tardis,  precipitated the watershed serial, The Edge of Destruction. The third story of Doctor Who, it followed An Unearthly Child and The Daleks and was envisaged as an inexpensive means of producing the last two of thirteen episodes initially authorized by the BBC for production.

The Edge of Destruction Title Card

In a style very much similar to a psychological thriller, The Edge of Destruction focused principally on the interactions between the hitherto discordant Tardis occupants.  After leaving Skaro following the Tardis Crew’s defeat of the Daleks, the ship experiences a frightful bang whilst in flight. The Doctor is laying on the floor, Ian slumped in a chair, and Susan sprawled over the console.  All are unconscious, save for Barbara.  When each awake it is evident that all is not well. The memories of the occupants have been erased and Ian still thinks that he’s at Coal Hill School.

The story begins with all but Barbara unconscious.

After patching up the Doctor’s cut head with an almost magical bandage, Susan collapses when she touches the console.  Ian hauls Susan over his shoulder and takes her to the bedroom where he pulls an S shaped recliner down from the wall. Placing Susan on the bed, Ian briefly leaves the room and returns with a wet handkerchief.  Brandishing a pair of scissors, Susan sits up and asks Ian who he is.  She attempts to stab him, but being unsuccessful stabs at the reclining bed numerous times prior to collapsing again. This quite horrifying scene was the cause of many complaints to the BBC and the show’s pioneering producer, Verity Lambert, subsequently admitted that its inclusion was an error of judgement. 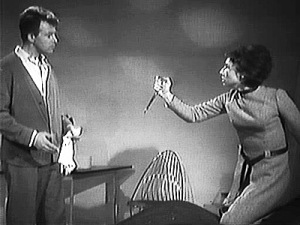 Susan threatens Ian with a pair of scissors.

Barbara wonders whether anything has entered the ship, perhaps another intelligence, thereby producing the crew’s illogical behavior.  An impatient Doctor dismisses Barbara’s concerns and labels them “absurb theories”.  Although Ian had removed the scissors from Susan, she subsequently sneaks out of the sleeping bay and retrieves them, returning to the bed and feigning sleep.  When Barbara checks on Susan she again menaces her with them.

Barbara and the fabulous food machine.

The Doctor, meanwhile, has become increasingly paranoid and accuses Ian and Barbara of having tampered with the ship’s controls.  In response to Ian’s question of why ever they would do that, the Doctor states “Blackmail, that’s why.  You tried to force me to return you to England”. The subsequent exchange between Barbara and the Doctor exhibits so profoundly the distrust and fear amongst the ship’s crew.  It’s worth quoting a section verbatim.

BARBARA: How dare you! Do you realise, you stupid old man, that you’d have died in the Cave of Skulls if Ian hadn’t made fire for you?
DOCTOR: Oh, I
BARBARA: And what about what we went through against the Daleks? Not just for us, but for you and Susan too. And all because you tricked us into going down to the city.
DOCTOR: But I, I
BARBARA: Accuse us? You ought to go down on your hands and knees and thank us. But gratitude’s the last thing you’ll ever have, or any sort of common sense either.

Immediately it becomes evident that there is a force, other than the passengers, at work and the Doctor, in an apparent 180 degrees turn , admits that they need more time to think.  Bearing a tray with cups, he  offers all members of the party a cup of tea.  Ian is astounded by the Doctor’s bipolar type behavior and states “I wish I could understand you, Doctor.  One moment you’re abusing us, and the next, you’re playing the perfect butler”.

The Doctor and Ian.

The cliff hanger to the first episode sees the Doctor at the console with a person’s hands around his throat.  We learn in the next episode that these are Ian’s hands.  After being pushed away by the Doctor, Ian collapses on the floor.  The Doctor is furious and alleges that  Ian is play-acting.  Again he accuses Barbara and Ian of a plot to control the Tardis.  Despites Barbara’s protestations of innocence the Doctor states “I told you I’d treat you as enemies”.  Barbara asks the Doctor what he thinks she and Ian have done to him.  Have they hypnotised or drugged him?  Accusing the teachers of trying to poison Susan’s mind against him, the Doctor threatens to put Ian and Barbara off the ship. 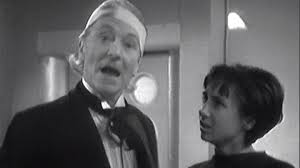 The Doctor with Susan.

The Doctor is soon to admit that the drink he gave them the prior evening was a sleeping drug.  The perfect butler he certainly wasn’t! For reasons best known to himself, the Doctor has an epiphany  and realizes that the problem lies with all crew members. Advising that they are on the brink of destruction, the Doctor says that total destruction is imminent.  Ten minutes is all he believes they had left. Why the crew would believe him, particularly as the Doctor is again forced to confess to lying to Ian, is a moot point.

Barbara and the Doctor.

After an educational diatribe on the formation of solar systems, the Doctor admits to having underestimated Barbara.  It was the spring in the Fast Return, which was permanently switched on, which had been the fault all along.  Barbara, not being happy to accept half hearted apologies, sulks and asks the Doctor why he cares what she thinks and feels.  “As we learn about each other, so we learn about ourselves”, the Doctor responds.  Admitting that he’d accused Ian and Barbara unjustly, the Doctor complimented Barbara on her determination to prove him wrong.

It was the Fast Return all along.  It’s a shame that the BBC couldn’t afford any professional lettering!

The episodes ends with the Tardis having landed in a snow covered land. Offering Barbara “wearing apparel” from the ship’s “extensive wardrobe” the Doctor gives Barbara his arm and states “we must look after you, you know.  You’re very valuable”.

The Edge of Destruction was originally broadcast on BBC ONE between 8th and 15th February 1964.