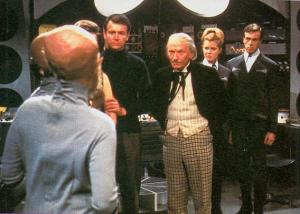 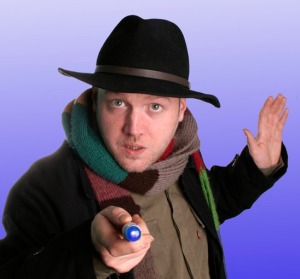 HADOKE:  The Sensorites.  Poor, unloved, The Sensorites.  Nestling, lost somewhere, down the back of the fans’ collective sofa.  There it lies at number 7 in the first heady year of Doctor Who.  It didn’t even have the decency to be wiped so we could all mourn its loss, and imagine how brilliant it must have been.  It’s not a story anyone really talks about.  We certainly don’t know that much about it … 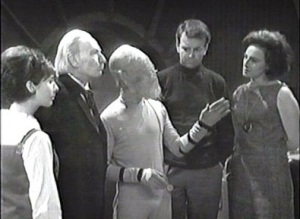 The Tardis Crew and a Sensorite

Yes, the much derided The Sensorites. In the development of Doctor Who, however, The Sensorites is not without merit.  If it were not for The Sensorites there’s a distinct possibility that one of the New Series’ favourite creatures, the Ood, may never have made their way to The Impossible Planet in 2006.  Like the Ood, the peculiar looking Sensorites have a humanoid bodily appearance but with rather unusual heads. They share telepathy with the Ood and a tube that hangs from their body.  In the Sensorites case there isn’t an external brain at the cord’s end, but rather a stethoscope type device which, when put to the forehead, permits their telepathic communication.  Devoid of the Ood’s face tentacles, the Sensorites instead have a fine head of hair growing onwards and upwards from their chins.  It’s perhaps because of the quantity of hair on the lower part of their heads that they have none left for their bald heads!  Like the Ood, the Sensorites appear genderless and nameless.  According to 2008’s Planet of the Ood, their home planet, the Ood-Sphere, is close by to the Sensorites’ home, the Sense-Sphere.

The near neighbours of the Sensorites, the Ood.

Tat Wood and Lawrence Miles in their well regarded series of books, About Time, describe The Sensorites as “quite possibly the most important Doctor Who story of all”.  Why? Because “the Doctor saves a planet not simply to get his Ship back but because it’s the right thing to do”. Yes, the Doctor that we know and love is beginning to develop.  For once he’s the instigator of action, rather than Ian, and beginning to be less egocentric. The Doctor, quite inexplicably though, still threatens to put Ian and Barbara off the ship at the next planet because Ian reiterates the Doctor’s own admission that he can’t control the TARDIS.  There’s still some way to go for the Doctor, although he’s beginning to take the well worn path that we all know. 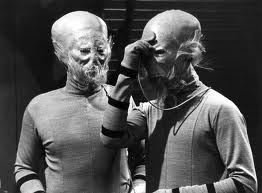 In The Sensorites Susan exhibits a strong telepathic tendency in her ability to communicate with the planet’s locals. She is a little more reminiscent of the Susan we see in An Unearthly Child and also quarrels with her grandfather for the first time.   “Growing up” is how the forever teacher Barbara describes her behavior to the Doctor.

Susan and a Sensorite

The change that is taking place in the Tardis Crew is mentioned in the first episode, Strangers in Space.  It also provides a convenient potted summary of the crew’s adventures in the previous 6 months since Doctor Who was first broadcast.

IAN: There’s one thing about it, Doctor.  We’re certainly different from when we started out with you.

SUSAN: That’s funny.  Grandfather and I were talking about that just before you came in.  How you’ve both changed.

DOCTOR: Yes, it all started out as a mild curiosity in a junkyard, and not it’s turned out to be quite a, quite a great spirit of adventure, don’t you think?

IAN: Yes.  We’ve had some pretty rough times and even that doesn’t stop us.  It’s a wonderful thing, this ship of yours, Doctor.  Taken us back to pre-historic times, the Daleks.

BARBARA: And the Aztecs.

The Sensorites was originally broadcast on BBC1 between 20th June and 1st August 1964.