You can always be assured that Rob Shearman will give a hearty defence of any long derided Doctor Who serial.  Writer of the Series One episode, Dalek, and several Big Finish audio productions, Shearman joined with Toby Hadoke, of Moths Ate My Doctor Who Scarf fame, to author Running Through Corridors: Rob and Toby’s Marathon Watch of Doctor Who.  Shearman’s affection for The Space Museum is  laid bare in the DVD special feature, Defending the Museum.  His devotion rests on the assumption that The Space Museum is a parody of William Hartnell era Doctor Who episodes. The aggressors, the Moroks, are little more than morons who invade a planet only to turn it into a museum for their past achievements. The rebels are excruciatingly bad.  Dressed in black polo neck jumpers, they look like students in a coffee bar.  Vicki starts a revolution only because she’s bored and the native Xerons don’t need a great revolutionary, just a locksmith! 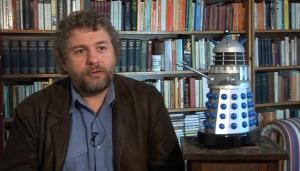 Shearman is quick to praise episode one of The Space Museum, which he considers quite extraordinary. The story, he argues, is about inaction and how an event can be prevented once you know it’s going to happen. If this was in a theological context the argument would be about predestination and Calvinist theories of same.  In the world of Doctor Who, however, does doing something really matter?  In The Space Museum’s case it certainly does.  Although all the motions of the Tardis Crew lead them into the very same situation, their actions have a positive effect on third parties.  It is precisely because of other people’s deeds that history, for want of a better word, is changed and the Doctor and his companions are saved.

The Tardis Crew as museum exhibits

Although Shearman’s analysis is a worthy summation of the serial’s message, The Space Museum suffers from internal contradictions which counter this.  In episode four Barbara laments that the crew have been on four separate journeys involving  four discrete courses, yet they all lead to this one point.  The Doctor explains that their actions may have influenced others, to which Ian responds by concluding that it can be others that change the future for them.  Vicki quips in with the example of a revolution.  What none of the Tardis Crew seem to realize, however, is that they’ve actually changed history themselves.   The Doctor made much of the loss of one of Ian’s buttons earlier in the serial and chided him for not having noticed whether the frozen Ian in the display cabinet  had a lost button or not. The Doctor and his companions, after all, were all wearing the same clothes.  What no one twigged to, regrettably, was that once Barbara’s cardigan had been unravelled then she was no longer identical to the cardiganed Barbara in the display case.  A bite of Barbara’s cardigan by a clueless Ian, and Barbara’s homely skills in teaching Ian how to retrieve wool from a knitted garment, was all that was required to save them. Heck, who needs a revolution with an arsenal of firearms when a knitted one will do!

The Space Museum is resplendent with comic interludes, the Doctor being given the majority of them.  Eccentric as always, the Doctor frequently giggles at the cleverness of his own actions.  After tying up a young Xeron rebel without the victim even seeing him, the Doctor hides in the casing of a Dalek exhibit.  Popping his head out of the top of the Dalek is a classic moment.  When hooked to the Moroks’ thought machine he is able to outwit the truth analyser which reflects thoughts onto a television screen.  When asked how he arrived on Xeron, a picture of a penny farthing is flashed onto the screen.  A pod of seals is seen when the Doctor is asked where he comes from.  The Doctor naturally cackles with glee. 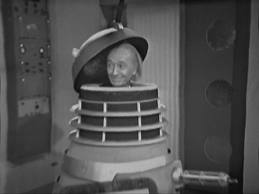 The Doctor hides inside the casing of a Dalek exhibit

Ian is portrayed in a menacing and quite violent light in this serial.  Although cheerfully playing a game of “Cowboys and Indians” after removing a ray gun from its exhibition case, Ian is soon brandishing the weapon like a true warrior.  Threatening the aggressors with a gun comes easily to Ian, who astounds the viewers with his matter of fact acceptance of violence near the close of the third episode.  Pointing the ray gun at the Morok leader, Ian is told by the threatened Lobos that he’d be a fool to kill him.  “You will achieve nothing”, says Lobos.  Ian’s reply is chilling – “Possibly, but it might be enjoyable”. Ian’s colleagues at Coal Hill School would scarcely recognize him.

Morok Leader Lobos. The Moroks’ hairstyles are as unappealing as the Xerons’ eyebrows

Vicki is able to distance herself from the Doctor in this serial and spends much of the time in the presence of the young rebel Xerons.   She has a rudimentary knowledge of the Daleks from 25th Century history books although she is surprised at how unintimidating they appear. Vicki has a sound understanding of time dimension theory and is able to re-programme a less than intelligent computer to accept truthful, but otherwise incorrect, answers.  As previously mentioned, her crowning glory in the serial is convincing the laid back rebels that revolution is not only a good, but also an achievable, objective. Unfortunately everything concerning the revolution is too easy and entirely implausible, with young Vicki making it appear like a fun afternoon distraction. 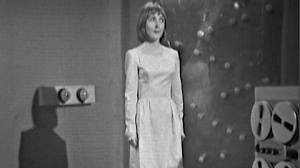 Romance appears imminent at the story’s end as Vicki bids a fond farewell to the rebel, Tor.  Holding both of his hands on their goodbyes, it appears for a moment that Vicki may have to choose between love and the Doctor.  Alas, another quick marriage proposal is not made and Vicki remains with the Tardis Crew – at least for the moment.

Those bizarre Xeron extra eyebrows. Is it little wonder that Vicki didn’t stay?

Barbara’s role in The Space Museum  is somewhat less forthright than usual, although she does display her characteristic homely skills in clothing (de)construction. The costume department failed her miserably and she is dressed in the most matronly garb yet seen. That the show was filmed almost live is evident from Barbara’s half slip being in view for the best part of an episode. 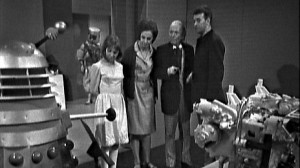 The Tardis Crew examine the Dalek exhibit. Barbara lucked out in the costume department

The serial ends with the revelation that the whole “time dimension” problem was caused by a stuck component in the Tardis.  If this sounds familiar, well it is.   The bizarre events of The Edge of Destruction were prompted by the same type of technical malfunction.  As Tat Wood and Lawrence Miles state in About Time 1, the Doctor has clearly yet to discover WD40!

The special features on The Space Museum DVD are well worth viewing.  Together with Rob Shearman’s defence, there’s also a delightful short piece,  My Grandfather, the Doctor, in which Jessica Carney speaks about the career of her grandfather, William Hartnell.  Comedian Christopher Green’s spoof, A Holiday for the Doctor, in which he stars as actress Ida Barr, is not to be missed. 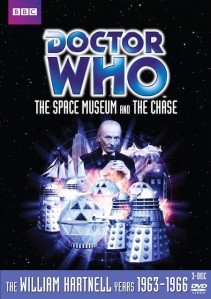