With all the hype surrounding Doctor Who’s 50th Anniversary  on 23rd November,  the 50th birthday of the Doctor’s oldest and most deadliest foe, the Daleks, looked like it may well have been forgotten.  Born on the screens of the United Kingdom’s 405 line black and white TV sets on 21st December 1963, the Daleks have appeared in over 30 Doctor Who serials, together with a number of cameos and flashbacks.  They have battled against 10 of the Doctor’s 11 incarnations and have been killed and resurrected more times than Rory Williams! 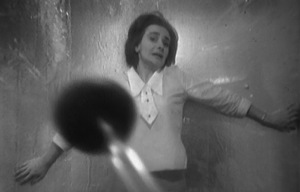 The BBC has today announced that the Daleks will appear in the Doctor Who 50th Anniversary special, together with the shape shifting Zygons who will make only their second appearance  – 38 years after their first. Details of the nature of the Daleks battle with the Tenth and Eleventh Doctors, together with John Hurt, a hitherto unknown incarnation, have yet to be revealed.  Let’s hope it’s as memorable as the closing shot of 1963’s The Dead Planet where companion Barbara Wright is pinned in fear against wall.  Barbara’s screams indicated the presence of a terrifying foe, although for the next seven days the audience could only but imagine what the strange rubber object on the end of a metal rod was. The Daleks were born and there was no looking back.  Without the Dalekmania which followed their first story, it’s unlikely that Doctor Who would have celebrated its first birthday, let alone its 50th. Long live the Daleks and may we look forward to another 50 years of terror!