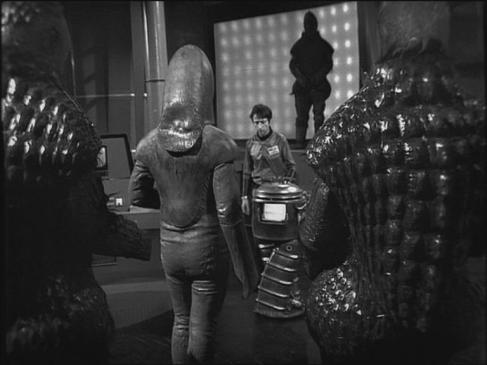 The Doctor had long shown himself to be adept at time travel, however it was not until the 1969 serial The Seeds of Death that he was seen to man a more conventional form of space transportation, a rocket.  That the Doctor and his friends should find themselves on a rocket to the Moon should come as no surprise given that this serial was broadcast in early 1969 and the Apollo 11 landed the first humans on the Moon on 20 July 1969. What is more astounding is that in the world of Doctor Who rockets are perceived to be outdated and an anachronism.  In The Seeds of Death Professor Eldred is the curator of a space museum who spends his spare time secretly working on a rocket.  All transportation is now carried out by T-Mat, otherwise known as transmit, a form of instantaneous particle matter transfer. Even motor cars have become redundant and the T-Mat system is used to transport people and produce throughout the world.  There is a T-Mat relay on the Moon and it is from there that the Ice Warriors intend to commence their conquest of the Earth.

Jamie, the Doctor and Zoe arrive on Earth following their adventures with The Krotons

That there is no alternative transport to T-Mat is extraordinary, particularly as the sustenance of the whole world is dependent upon its operation. This extreme example of “putting all your eggs in one basket” was what led the Doctor and his companions to risk their lives in an untested experimental rocket.  It appears that together with world famine, local stock-piling of goods has long since ended. Although the details provided in The Seeds of Death are sketchy, it appears that the T-Mat system is operated, if not wholly owned, by a corporation named Travel-Mat.  What Travel-Mat’s relationship is to the governments of the world is not specified. Perhaps Travel-Mat is the world government? Travel-Mat certainly has some relationship with the United Nations as Professor Eldred describes Sir James Gregson as the United Nations Plenipotentiary.  Radnor clarifies this by saying that Gregson is the Minister with special responsibility for T-Mat. I suspect that the climate change sceptics with whom I frequently debate would revel in declaring The Seeds of Death to be an accurate prediction of their New World Order conspiracies. Come to think of it, most climate change deniers know so little about science that they’d probably think the mistaken “science” of The Ice Warriors is correct.  Distinguishing fact from fiction can at times be difficult for some, hence the premise behind The Mind Robber!

Arguably the most powerful person employed by Travel-Mat is Miss Gia Kelly, the Assistant Controller, who inexplicably is the only person who completely understands T-Mat.  Again the question arises as to what would happen to this world-wide transport system, on which the distribution of all Earth’s food is dependent, if Miss Kelly suddenly became indisposed. It’s a pleasant development in Doctor Who to have a women in such a powerful role and not be denigrated for her gender by fellow on-screen workers. Kelly even managed to escape the sexism inherent in the UNIT soldiers’ praise for Zoe in The Invasion, when they said that she was “prettier than a computer”.  That being said, I’m at a loss to understand why Kelly was portrayed as so officious and unable to smile.  What does this say about our perceptions of powerful women? Do women that attain the giddy heights of success necessarily relinquish all vestiges of humanity in the minds of others? Even a casual observer to Australian politics in recent years would be cognisant of sexist vitriol thrown at our former Prime Minister, Julia Gillard. Being “deliberately barren” was perhaps the most offensive of them all.  I would posit that the writer Brian Hayles’ portrayal of Kelly is an example of this offensive stereotyping of successful women.

Miss Kelly is the only person who truly understands T-Mat. She is pictured here with the rocket countdown reflected onto her face

Unfortunately I have a concern with the Doctor’s ethics in The Seeds of Death. At the serial’s end the Doctor sent the Ice Warriors’ rockets onto an orbit close to the Sun by transmitting a fake homing signal.  When the Warrior Slaar told the Doctor that he has destroyed their whole fleet, the Doctor’s response was that “you tried to destroy an entire world”. Given that the Doctor believed these Warriors to be the only survivors of their species, he was effectively committing genocide. Whilst we all now know that the fleet didn’t comprise the last of the Ice Warriors, that’s not the point.  The Doctor acted in a similar manner to the Daleks in The Evil of the Daleks and to the Drahvins in Galaxy 4. In my review of Galaxy 4 I discussed in some detail how the Doctor’s apparent genocide of a race was at odds with his classic moral deliberations in The Genesis of the Daleks. 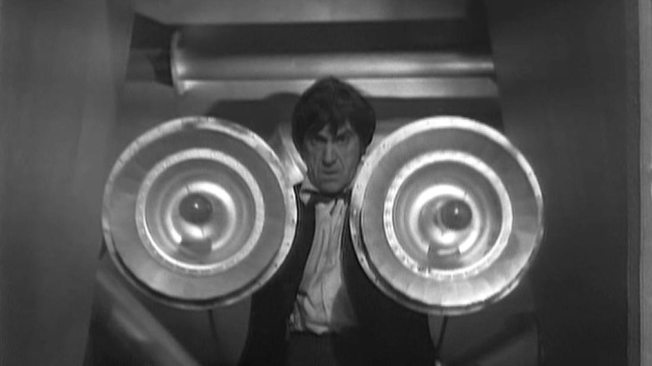 The Doctor kills the first of many Ice Warriors

Akin to Brian Hayles’ problems with science in The Ice Warriors, The Seeds of Death is similarly tainted.  Remarkably, whilst the Ice Warriors collapsed when the temperate reached 60 degrees Celsius, the humans exhibited no ill effects at all.  Not a bead of sweat was seen to develop on a single brow. This story did, however, again exhibit Hayles’ apparent concern for things environmental. The plant consuming foam which emerged from the Ice Warrior’s seeds would eventually result in the removal of all oxygen and the death of humans as the atmosphere became more akin to that of Mars.

The Doctor discovers that water destroys the Ice Warriors’ seeds

Technology had also caught up with Doctor Who by the Ice Warrior’s second appearance. Filmed inserts for episodes were by then being produced during the recording of the previous stories.  Because of the 1968/1969 Christmas/New Year break, some inserts were filmed up to six weeks prior to the recording of the episodes. It’s for that reason that careful observation will show that within the same episode the Doctor can at one point have particularly bushy side-burns, and the next moment has none.

When Jamie suggested that the Doctor should use the TARDIS to travel back to the Moon the Doctor was quick to advise that “the TARDIS is not suited to short range travel”.  It’s a shame that the Eleventh Doctor  didn’t remember that  when he decided to take the TARDIS for a quick hop to the Moon to run her in during The Eleventh Hour (2010).  He didn’t come back to Amy until two years later!  The Doctor also seemed to have forgotten exactly how much of an unpleasant time he’d had when last he visited a space museum (The Space Museum). Quite naturally Zoe knows how to pilot a rocket so she necessarily went up in my esteem, yet again.  She also has a photographic memory. 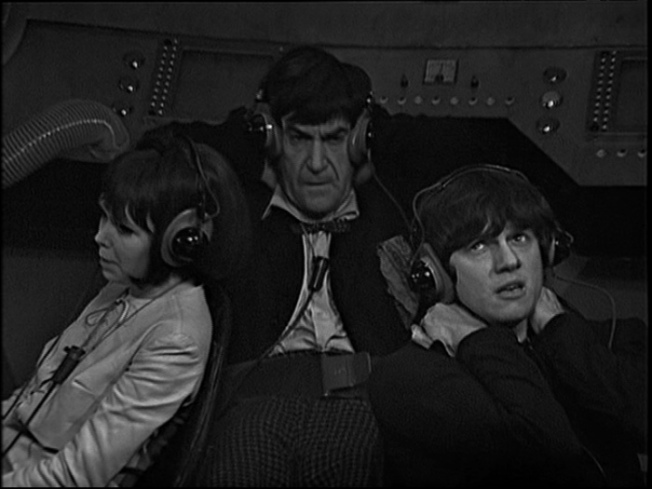 Amongst her many skills, Zoe can pilot a space rocket

With the conclusion of The Seeds of Death we say goodbye to the last monster story of Patrick Troughton’s tenure.  Not only is it the final monster serial of the 1960s but also of Doctor Who’s monochrome era.  Troughton’s penultimate adventure, The Space Pirates, has no aliens although it does have a space cowboy who is almost as bad, in a frightening sort of way! 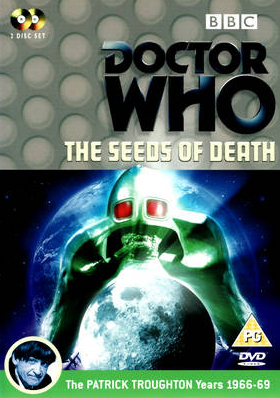