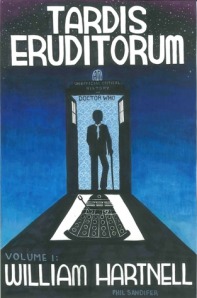 It is sufficient for our purposes now to limit discussions to the single 25 minute episode entitled Mission to the Unknown.  The last Doctor Who story produced by Verity Lambert,  this serial was screened the week following episode four of Galaxy 4.  Whereas the overwhelming number of Who serials start in the console room of the Tardis, Mission to the Unknown commences with a man unrecognizable to the viewer lying almost unconscious on the ground.  Around him is a jungle, or at least we believe it to be a jungle because this episode, like another 105 others of 1960’s Doctor Who, is lost.  Not only was it junked by the BBC, there are also none of John Cura’s extremely helpful telesnaps.  Instead we are left with just a handful of photos to guess what the story looked like.  This has not stopped fans making reconstructions utilizing the audio and ingenious methods of visually representing the action.  For my marathon I watched two such reconstructions – an animation produced by lifelong Who fan, Ian Levine, and the other by Loose Cannon.  Both can be accessed below for your viewing pleasure.

Ian Levine’s animation of “Mission to the Unknown” Part 1

Ian Levine’s animation of “Mission to the Unknown” Part 2

Mission to the Unknown  brought  a sense of  terror back to the Daleks after the somewhat unsuccessful attempt at comedy in The Chase.  Given that the Daleks were the “bread and butter” of Doctor Who it was a wise move by the production team to reaffirm their deadly disposition.  Akin to the Daleks’ home planet of Skaro, the planet Kembel, on which three space travellers are stranded, is a dangerous place. Space pilot Marc Cory asserts  that it’s the most hostile planet in the universe and is avoided by other civilizations.  Unbeknownst to the space travellers on their arrival, there is a Dalek base on Kembel.  Cory first twigs to this when he comes upon a Varga plant.  Natives of the planet Skaro, Varga plants were developed in Dalek laboratories and grown to give the Daleks extra protection.  Part animal and part vegetable, they look somewhat like a cactus and drag themselves along by their roots. The Varga plants have large thorns containing poison.  If pricked by one the human victim dies and is quickly transformed into a Varga plant. The poison in the plant attacks the victim’s brain and produces in them an overwhelming desire to kill.  They are devoid of all rational thought. 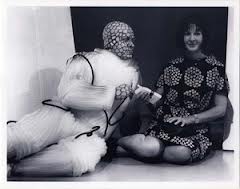 A press photo of Doctor Who producer, Verity Lambert, with one of the Daleks’ allies, Malpha.  Is Verity offering the alien a cigarette?

First crew member Jeff Garvey, and then another, Gordon Lowery, are victims of the Varga thorns.  Cory, who is with the Space Security Service, and therefore “licensed to kill” (Terry Nation had been watching too much James Bond!), shoots both Garvey and Lowery dead prior to their transformation into Varga.  Both men transform into Varga after their deaths.  Shortly thereafter Cory himself is exterminated after being encircled by Daleks.  During all of these death our hero, the Doctor, is nowhere to be seen.   The man who viewers have depended on for almost two years to always save the day is either unwilling, or unable, to thwart these vicious attacks.  Moreover, the Daleks are holding a conference on Kembel with emissaries from seven outer galaxies.  They are sure to all be horrid looking aliens.  If only we could see them! The allies plan galactic domination and to conquer Mars, Venus, Jupiter and the Moon colonies.  Their first conquest  will be Earth. With a 100 per cent success rate in killing all three humans in the serial,  things look decidedly rosy for the Daleks and their allies.  These are troubling times indeed. Without the Doctor the future for the whole galaxy is bleak.