Today The Doctor Who Mind Robber commences its 50 Day Countdown to Doctor Who’s 50th Anniversary. Today the author will also conclude the 1960s component of her Ultimate Doctor Who Marathon by viewing the final episodes of Patrick Troughton’s last serial, The War Games. What more appropriate era to concentrate our daily articles on than Sixties Doctor Who?

For the next 50 days we will publish a daily article on a 1960s related topic. Perhaps appropriately, given the ongoing Missing Episodes Hysteria, our first survey will be on the Ten Most Wanted Missing Episodes.

Having just finished reading Terrance Dicks’ novelization of The Abominable Snowmen I’d love to see the five missing episodes returned to the BBC Archives.  Episode two has been released on Lost in Time.

The first of Doctor Who’s two Yeti stories, The Abominable Snowmen is set in the Himalayan Buddhist Monastery, Det-Sen in 1935. Together with introducing the Yeti to the world of Who, the story is also the first appearance of the Great Intelligence. Given the Intelligence’s reintroduction as the major protagonist of Series 7 (The Snowmen, The Bells of Saint John, and The Name of the Doctor), The Abominable Snowmen has obvious marketing potential to New Series fans.

Together with providing fans with another full adventure with the little seen companion Victoria, The Abominable Snowmen is also significant for including the father and daughter team of Deborah (Victoria) and Jack (Travers) Watling.  The story was one of the first to involve extensive location filming and features some splendid Welsh scenery as Snowdonia substituted for Tibet.  The Yeti, whilst menacing, are also adorably cute.

Patrick Troughton on the set of The Abominable Snowmen

Ben and Polly’s farewell serial, The Faceless Ones is one of my personal favourites.  Episodes one and three are in the BBC Archives and have been released on the Lost in Time compilation.

Set in modern day London, The Faceless Ones was filmed at Gatwick Airport and features Pauline Collins as the would-be companion, Samantha Briggs.  Collins would appear in Doctor Who 39 years later as Queen Victoria in Tooth and Claw.  The serial has certain similarities with the Mark Gatiss penned Series 2 serial, The Idiot’s Lantern.

As one of the few “present day” serials of Doctor Who’s monochrome era, The Faceless Ones is a worthy companion to Ben and Polly’s first serial, The War Machines.  The pair departs on the same day as their arrival in the aforementioned story, which is unfortunately their only complete serial.  The most under-represented of all 1960’s companions in terms of extant episodes, it would be a delight to finally see Ben and Polly’s farewell to the Second Doctor in episode six.  As the companions who flawlessly provided the continuity between the First and Second Doctors, Ben and Polly justifiably deserve more screen time.

Another Patrick Troughton serial with a monster revived in New Series Doctor Who (Gridlock), The Macra Terror is entirely missing from the BBC Archives. Featuring Ben and Polly as the Second Doctor’s companions, The Macra Terror features the monster which put paid to model maker Shawcraft Models’ association with Doctor Who. The few off air clips available are just fabulous.  As previously mentioned, there are far too few Ben and Polly episodes so any finds will allow us to fully appreciate their significant contribution to this tumultuous period of Doctor Who’s history.

A publicity shot for The Macra Terror

The 12 part Hartnell era masterpiece, The Daleks’ Master Plan has nine of its episodes missing. Episodes two, five and ten have been released on Lost in Time.

The DMP is resplendent with firsts, including Nicholas Courtney’s premier appearance in Who as secret agent Bret Vyon, the first deaths of companions, and the first return of a humanoid villain, the Monk. The short-lived companion Katarina, played by Adrienne Hill, is killed in episode four, which also sees the death of Bret Vyon at the hands of his sister Sara Kingdom (played by Jean Marsh).  Sara Kingdom, who also subsequently becomes a companion, is killed in episode 12.

The DMP is perhaps the least likely of all serials to be recovered.  Although sold to Australia it was never broadcast as a consequence of censorship problems. The DMP is in fact the only Doctor Who serial to have never been screened in Australia.  Australia is the only country to have purchased all Who serials since the first serial, An Unearthly Child. Australia’s neighbour, New Zealand, has an equally prestigious record of long standing support, having purchased all serials save for the DMP.   The ABC has confirmed that it no longer holds the episodes.  The serial was sold to no other countries.

The only non-Monster story in Season 5, The Enemy of the World is one of the most sought after Troughton era serials.  Only episode three is held in the BBC Archives and has been released on the Lost in Time DVD.

Very much in the style of a James Bond movie, The Enemy of the World is unique in that Patrick Troughton plays two roles – the Doctor and also the evil would-be world dictator, Salamander.  Featuring Who’s first helicopter and hovercraft scenes, which will become all too familiar during Jon Pertwee’s tenure as the Third Doctor, The Enemy of the World is so unlike the “Base Under Siege” stories as to warrant an exulted position in the archives of Doctor Who.

Patrick Troughton as Salamander in The Enemy of the World

The second and final Yeti story, The Web of Fear has only one episode in the BBC Archives.  Episode one has been released on Lost in Time.

The Web of Fear is set in the present day London Underground and introduces Colonel Lethbridge-Stewart.  Quickly promoted to Brigadier, Lethbridge-Stewart went on to have a distinguished career of more than 40 years with Doctor Who and its franchises.  Bringing monsters to London foreshadowed the Third Doctor’s earth-bound tenure and Jon Pertwee’s much quoted phrase, “Yeti on the Loo”.  It precipitated Doctor Who’s propensity to bring horror and science fiction to the mundane, everyday streetscapes of viewers.

The second and final Dalek serial of the Troughton era, only episode two of the seven part serial is held in the BBC Archives.  It has been released on the Lost in Time DVD.

Coming in at 18 in the 2009 Doctor Who Magazine Mighty 200 poll, The Evil of the Daleks was the most highly placed Second Doctor story.  Set in Victorian England, it introduced the new companion Victoria who, having lost her father to the Daleks, was effectively adopted by the Doctor and Jamie.  The story featured the concept of the “human factor” in Daleks, something which would re-emerge in the first Dalek story of 21st Century Who, Dalek.  It also included some lovely scenes in which “baby” Daleks, who had been impregnated with the “human factor”, gleefully played trains with the Doctor. 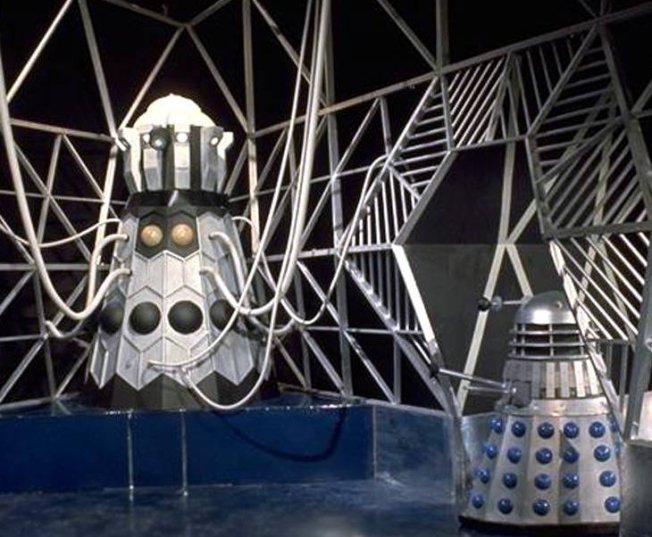 The Power of the Daleks is Patrick Troughton’s first serial as the Second Doctor.  In what could only be described as criminal negligence, none of its six episodes are held in the BBC Archives.

Widely acclaimed as one of the better 1960s Dalek stories, Power of the Daleks introduces a Doctor not only wildly different from his predecessor, but also significantly divergent from Troughton’s later portrayal.  This is the first the viewer sees of a Doctor who will rapidly transform during the course of Season Four.  The recorder, stove-pipe hat and baggy trousers will soon be a thing of the past.  More importantly, however, the Doctor’s personality significantly evolves. The Power of the Daleks is also remarkable for the magnificent Dalek production line, which by luck rather than good management, is still available for our viewing pleasure as a short clip.

The Doctor, Polly and Ben are confronted by Daleks in The Power of the Daleks

Although episodes one, two and three of The Tenth Planet exist in the BBC Archives, episode four has been lost in time.  Together with the recently animated lost episode, The Tenth Planet will be finally released on DVD in November 2013.

Often described as the proto-type for the Troughton era “Base Under Siege” stories, The Tenth Planet heralded the introduction of the Cybermen. It is perhaps best remembered, however, as William Hartnell’s final story as the Doctor. It is most unfortunate that of all episodes to be lost, it is the final episode with Doctor Who’s first regeneration that doesn’t grace the shelves of the BBC’s Archives. This loss is compounded by the complete absence of Patrick Troughton’s first serial, The Power of the Daleks, from the Archives as well.  Gone also was the opportunity to see the regeneration reprised in the first episode of the next serial.  As luck would have it, however, an amateur film taken off-screen during the broadcast of episode four exists and allows fans to witness this historic regeneration, albeit in a rather grainy form. 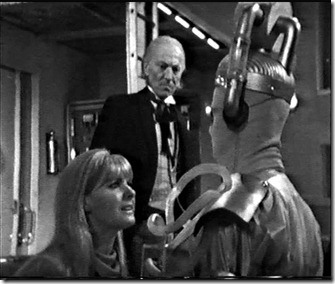 The Tenth Planet introduces the Cybermen to Doctor Who for the first time. A Cyberman is pictured here with Polly and the Doctor

Undoubtedly the most highly sought after missing Doctor Who story is Marco Polo.  The fourth story of the series’ first season, this historical drama is the earliest missing story. Directed by Waris Hussein, who also directed Doctor Who’s first serial An Unearthly Child, all that remains visually of this story is a collection of beautiful colour photographs taken during the filming. On the basis of these photos alone, Marco Polo appears to have been an exceptionally cinematic production. As the most widely sold Hartnell era serial, it’s nothing short of bizarre that not a single episode has resurfaced.

A thirty minute reconstruction of Marco Polo was released with the three disc box set The Beginning, which also includes An Unearthly Child, The Edge of Destruction and The Daleks. 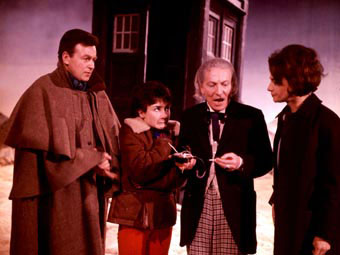 The Doctor and his companions in Marco Polo

1. Fury From the Deep

5. Mission to the Unknown

TOMORROW – DAY 49 – The 10 Least Remembered Monsters of the Sixties

For the latest developments in the Missing Episodes Hysteria please see our articles on recent Mirror and Radio Times articles.