Speculation is rife on the nature of Peter Davison’s involvement in Doctor Who’s 50th Anniversary celebrations.  Digital Spy has reported Davison to have said “I’m making an appearance somewhere over that period of time but I can’t reveal in what. I can’t reveal anything specific about it. I’m not allowed to. It is a big year for the show and we’re all doing our bit for it. Trust me.” 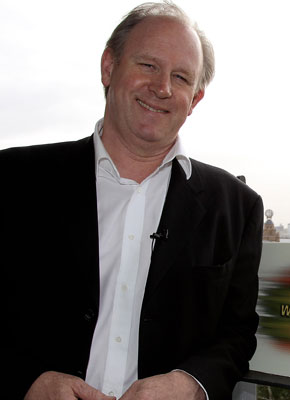 A recent photo of Peter Davison

Davison, who played the Fifth Doctor from 1981 to 1984, could be alluding to anything from a convention appearance, of which he has four scheduled for November 2013, to a role in the 50th Anniversary special, The Day of the Doctor.

BBC promotional poster for the Doctor Who 50th Anniversary Special, The Day of the Doctor

In March 2013 TV Rage reported that Davison had denied being involved in the 50th Anniversary Special. Speaking at the Mysticon convention in the US Davison said “I don’t think it will involve the older Doctors, certainly in their present form, because of course we’re meant to look exactly as we did when we left the TARDIS and none of us really do. Some of us are not here any more and others of us have weathered less well than others. I don’t know where I’d put myself in that category. I’m not going to make that decision.”

Davison, along with Colin Baker, Sylvester McCoy and Paul McGann, was in Australia for the Lords of Time Conventions in April 2013.  It was at that time that the location shooting for The Day of the Doctor was being undertaken in the UK. Appearing on the Australian television morning show, the Sixth, Seventh and Eighth Doctors denied any official involvement in the official 50th Anniversary television special.

Perhaps the involvement that Davison is alluding to is audio rather than television. It has previously been confirmed that Tom Baker, Peter Davison, Colin Baker, Sylvester McCoy and Paul McGann will be appearing in the special 50th Anniversary Big Finish audio production, The Light at the End.  Joining the five Doctors will also be Louise Jameson (Leela), Sarah Sutton (Nyssa), Nicola Bryant (Peri), Sophie Aldred (Ace), India Fisher (Charley Pollard), Geoffrey Beevers (The Master).  The Light at the End is due for release in November.

As to what Davison’s true involvement in the 50th Anniversary celebrations is remains to be seen.  With only a little more than two months left until 23 November we don’t have long to wait for the answer.