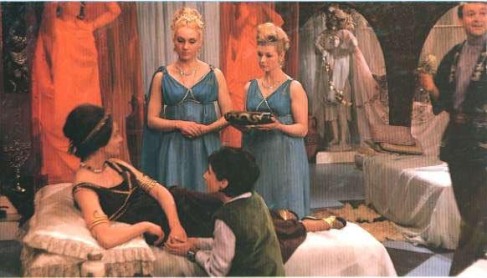 Much ridiculed by fans, but less so than The Sensorites, the Keys of Marinus is one of two little regarded stories in Doctor Who’s first season.     Written by the Daleks’ author, Terry Nation, it was hoped that the Voord, the principal baddies in the serial, would become the “next big thing”.  Alas, this was not to be and unlike the Daleks whose iconic status sees them still appearing in Who 50 years later, the poor Voord have never again been spied.  Although their heads were pretty cool, the wetsuit clad bodies and swimming flippers do not a great monster make!

You can’t help but love the Voord, the “next big thing” that were never seen again on Doctor Who.

Not dissimilar to season 16’s The Key to Time, this serial involves a quest by the Doctor and his companions to locate the four hidden micro-keys for the Conscience of Marinus, a machine with the power to not only judge good and evil, but also permeate the minds of citizens, eradicating all evil thoughts and intentions, and replacing them instead with only good and honourable deeds. 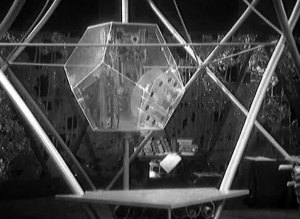 The Conscience of Marinus

Whereas the Fourth Doctor, Tom Baker, and Romana I’s quest for keys extended to six serials (five of four episodes and the last of six), the Keys of Marinus must be found in six episodes only.  Episodes 1 and 6 are set in the Tower, the home of Arbitan, the keeper of the Conscience of Marinus, whereas the remaining episodes (2-5) are each set in a different city or area of the planet Marinus.  The logistics of this, naturally, meant the construction of five different sets, something which invariably would have been a huge budgetary headache for the production team. The ravine over which the party, minus the Doctor, cross in episode 4, The Snows of Terror, looks suspiciously like the set used in The Ordeal, which is part 6 of The Daleks.   The trusty BBC could be assured of not wasting a good set!

Sabetha, with the assistance of Susan, crosses that ravine.

For all the criticism directed at the Keys of Marinus, which are too numerous to elucidate here, the story is not without its virtues.  The Doctor, who is absent from episodes three and four because William Hartnell was on holidays, begins to protect his reluctant companions more so than in previous stories.  In episode 5 particularly, Sentence of Death, the Doctor acts as Ian’s advocate at a trial in the city of Millennius.  Ian has been framed for murder and the legal system operating in the city is the opposite of that which we know in the United Kingdom and its former colonies.  Rather than there being a presumption of innocence, in Millennius one is guilty unless innocence can be proved beyond reasonable doubt.  Any person, irrespective of legal training, can appear as advocate (the equivalent to a solicitor, barrister or attorney) for the accused.  The Doctor shines in his spirited defense of Ian.  A salutary moral is obviously told in respect of the rule of law.

The senior judge in the city of Millennius. All three were possessed of the most outrageous head gear.

That humans should not be ruled by machines, and that individual conscience is essential to human society, is an overarching theme of the story.  The Conscience of Marinus’ destruction at the story’s end is shown as a worthy result.

The Doctor with Arbitan, the keep of the Conscience of Marinus

Ian remains the hero of the show which is all the more evident in that the Doctor’s absence in episodes three and four is barely noticed.  Susan screams too much, particularly in part 3, The Screaming Jungle, and Barbara is initially prepared to accept the decadent wealth of the city in part 2’s The Velvet Web.  Whilst Ian is the pragmatist and wonders what price you must pay for having all that you desire, he is soon won over.  It is Barbara, who after a night’s rest, can see through the charade and realizes that the beauty she had previously seen, and the other members of the Tardis Crew still see, is but an optical illusion.  Beautiful clothes are but rags and fine drinking ware is tin.  Barbara also has the tremendous scene where she smashes the Brains of Morphoton, horrid brains in bell jars that look not dissimilar to snails’ heads. It is in the next serial, The Aztecs, that Barbara will really shine. Striking throughout is the character of Sabetha, played by Katherine Schofield.  At the end I was left rather wishing that she’d joined the Tardis Crew and not gone off to start a new life with her boyfriend, the gorgeous Altos. 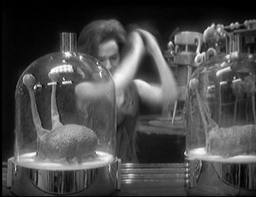 Barbara smashes the Brains of Morphoton