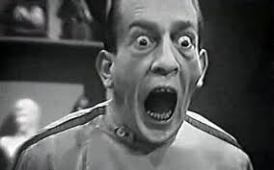 The next serial in my marathon is the penultimate for Season Five, Fury From the Deep. I’d rather like, however, to view the long awaited Ice Warriors before it. I’m hoping that The Ice Warriors DVD, which is released today, will materialize in my letterbox sometime this afternoon. It was supposedly posted from Melbourne on Monday, so here’s hoping that Australia Post adheres to its estimated delivery schedules!

Killing time in the interim, I’ve viewed Richard Bignell’s fascinating 1999 amateur documentary, The Making of Fury From the Deep. Running for 50 minutes, the documentary is resplendent with cast and crew interviews and interesting anecdotes from the filming. It comes highly recommended and can be viewed at the YouTube link below. Enjoy!

Richard Bignell’s The Making of Fury From the Deep.